The Applied Hydrogeology Award of the International Association of Hydrogeologists is presented annually to a person who is a groundwater professional and has made outstanding contributions to the application of hydrogeology, particularly in developing countries or in support of international development efforts. The Award for 2022 is presented to Ritchie Morris. 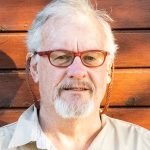 Ritchie Morris received his BSc Honours degree in Hydrogeology and Geography from Rhodes University in 1986 and was awarded a Diploma in Business Management in 1993. He is registered as a Professional Natural Scientist and with the Geological Society of South Africa, Groundwater Division.

Ritchie’s career began in the 1980’s with the Department of Water Affairs during university vacations, moving on to full-time employment with Steffen Robertson & Kirsten (SRK) in 1987. In 1999 he established Morris Environmental & Groundwater Alliances as a specialist environmental and groundwater service company.

In his earlier years, Ritchie conducted environmental risk assessment, and groundwater resource evaluation, development and management across South Africa. He undertook environmental management work for natural areas, especially estuaries and the coastal zone. He later specialised in soil and groundwater contamination, a particular highlight being the assessment and remediation of a dynamite factory, where he led a team that developed novel remote techniques to drill and sample in nitroglycerine soakaways, a world first.

A critical project followed devasting fires in the forests of the southern Cape in 2017, the worst in South Africa’s history. Ritchie used his knowledge of fractured rock aquifers, developing a wellfield of 5 ML/d to irrigate a 3km long, massed embankment of logs rescued after the fire, and prevent their decay during the 3 years it took to process the timber. This new aquifer source is of strategic value for future community conjunctive supply.

Ritchie is a keen supporter of the hydrogeological profession and he has presented many papers at both national and international conferences including at IAH congresses in UK and Portugal. He has been a guest lecturer at universities and provided training to local and national government groups.

Throughout his career, Ritchie has brought a considered, practical and energetic approach to his work. He has used his hydrogeological knowledge for the good of the environment and society, contributing to sustainable life and societal well-being. Ritchie Morris is a worthy recipient of the IAH Applied Hydrogeology Award.