Groundwater is a precious resource in Tunisia. Its use, transfer and management dates since many decades. Let’s work together to take care of these resources for the future generations!

March 2020: We are happy to feature Faten Jarraya Horriche. Faten is a researcher at the Centre for Water Research and Technologies in Tunisa (CERTE – Tunisia) and also president of our Tunisian National Chapter. 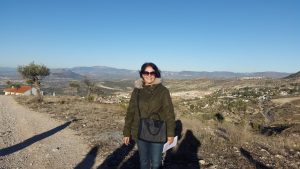 Tell us a little about yourself….
My interest in Hydrogeology and Modelling began in 1987 with my senior engineering project on the salt reserve of Sebkhat El Melah in Zarzis (South Tunisia) at the National School for Engineers of Tunis (ENIT – Tunisia). My knowledge on groundwater was reinforced when I integrated the General Direction of Water Resources (DGRE – Tunisia). I was in charge of hydrogeological and modelling studies, groundwater management and national strategies. My professional activities encouraged me to pursue further university degrees in parallel with my professional career which was a challenging task. In 1995, I got the Diploma of Deep Studies on applied mechanics of fluids and thermal transfers from the Faculty of Sciences of Tunis (FST – Tunisia); I developed a solute transport model using the particle trajectory method. In 2004, I got my Ph.D. from ENIT which dealt with the analysis and rationalisation of the national groundwater level network. Since 2005, I have had the status of researcher at the Centre for Water Research and Technologies (CERTE – Tunisia). I am in charge of research activities and student supervision dealing with hydrogeology and groundwater modelling for the research laboratory of Georesources (LGR). I conducted and was involved in several national and international projects related to groundwater.

Why did you join IAH?
I first heard about IAH in 2012 from a Moroccan colleague, Mr Mohamed Aboufiras, who was the IAH Vice President for the MENA region. He encouraged me to create the Tunisian IAH chapter as I was a member of the Tunisian NGO (Association Eau et Développement AED). During the AQUA2015 congress organized in Rome and I had the opportunity to discuss even further with Mr. Aboufiras and Mr. John Chilton, the IAH executive manager about the procedures to establish a Tunisian chapter. With the support of my colleagues, I have taken in charge this challenging yet promising mission. In June 2016, the Tunisian chapter was officially approved in the AED and the news was announced in the summer of 2016 newsletter of IAH. Thereafter, I was elected as the president of the AED and the IAH Tunisian chapter (Tunisian Committee of Hydrogeology TCH/CTH) https://aed.org.tn/cth/. In 2017, Tunisian membership was increased to 32 whereas it was only 13 in 2016!

What would you say have been your career highlights so far?
My career was marked by many key events and successes, the result of tremendous efforts. I am particularly proud of my managerial experience as a co-chair of the international congress AGIC2019 “Applied Geosciences for Groundwater” which was organized in March 2019 by my laboratory (LGR) and the IAH Tunisian chapter (TCH) https://aed.org.tn/agic-2019-28-30-mars-2019/. With the organizing committee, we ensured a good organisation and a fairly high scientific level with the participation of more than one hundred participants from 15 countries.

In 2000, as an engineer in DGRE, I managed a multi-disciplinary project on the multi-layered aquifers of Sfax (Tunisia) for a 3 year period. This was the opportunity to tackle project management and I was proud of its successful outcome.

What piece of equipment/software/item have you found the most useful/you could have managed without throughout your career?
I can’t imagine myself without my computer/laptop which I carry everywhere. My first computer in 1988 was without a hard disk and we used an external disk to boot the MS-DOS system! Ever since, I’m addicted to numerical tools as my work is related to groundwater modelling. The most useful modelling software for me is MODFLOW despite using other software. For database, I constantly use Microsoft Excel, Esri ArcView (in the past) and ArcGis since my early career. With these tools, I feel that I have knowledge of groundwater in spatiotemporal scale.

Future plans, aspirations?
I always wanted to set up a laboratory to experiment groundwater processes such as aquifer recharge, seawater intrusion, groundwater flow, interaction between layers, groundwater pollution, etc. It can be used as pilot laboratory for teaching, research and dissemination actions for stakeholders. It should be able to represent the complexity of geology and groundwater flow according to several situations and should be equipped by monitoring sensors to be used for smart management. I am keen to establish this idea one day!

Is there anything IAH should be doing? Could do better?
The IAH Tunisian chapter (TCH) is recent, and we are still trying to convince Tunisians to join. This task is not so easy because of membership cost. In order to disseminate our objectives and enlarge our activities we tried to use our network by organizing local events. However, this is not enough and we need to persuade Tunisians of the benefits of IAH membership. I think that IAH should support us more especially during these first years through training and joint events for the Ph.D. students to future IAH members and instil the attitude of membership to the international scientific community.

Any additional comments?
Groundwater is a precious resource in Tunisia. Its use, transfer and management dates since many decades. Let’s work together to take care of these resources for the future generation!