“Being a charismatic public speaker helps, but what is more important on a day-to-day level is being a good listener and taking an interest in the motivations and perspectives of colleagues and clients”.

December 2019: We are pleased to feature Sean Furey as a source of experience, his insights giving a mix of encouragement and useful links. Sean works for Skat Consulting Ltd. and Skat Foundation based in St. Gallen in Eastern Switzerland, and is Director of the Rural Water Supply Network (RWSN). 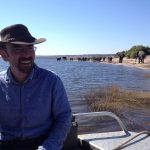 Tell us a little about yourself….
I grew up in rural southern England, in the shadow of the North Downs in Kent and then on the Marlborough Downs, in Wiltshire – so I’m a Chalk person. In front of my home in Wiltshire was a near-pristine Chalk stream that was a minor tributary of the River Kennet (which is itself a tributary of the Thames). I used to sit on a bridge nearby and watch water voles and kingfishers on the bank or look for the rainbow trout that often lurked just underneath, calmly swimming still in the current.

Later, after a BSc in Environment Sciences from the University of East Anglia (UEA) and an MSc in Community Water Supply and Sanitation from Silsoe (Cranfield), I began my career as Water Resources Officer in Kent Area of the Environment Agency. My first project was the River Darent Low Flow Scheme – doing hydrological and hydrogeological analysis to inform the (sometimes tense) discussions with the three main water companies in the catchment, local residents and the angling and conservation groups. From this, I quickly learned that groundwater and politics are often bound uncomfortably together. This was reinforced a few years later when I had the opportunity to be project manager of an Integrated Water Management Study for Ashford, Kent. It was in response to the government’s decision to make the town a growth hub, to double in size by 2030, in one of the most water-stressed areas of the UK. I think we came up with good solutions and trade-offs.

Since 2011, I have been working for Skat Consulting Ltd. and Skat Foundation based in St. Gallen in Eastern Switzerland. It is great to be working in international development cooperation and to have opportunities to work with amazing people all over the world from small community initiatives to global UN agencies. Since 2017, I have been Director of the Rural Water Supply Network (RWSN), a worldwide professional network with over 11,000 members worldwide focused on universal access to safe, affordable drinking water. For many rural people, groundwater is the safest, most accessible and reliable source of water. I took over from my colleague and friend, Dr Kerstin Danert, who won the IAH Distinguished Associate Award in 2017 (see https://iah.org/about/awards/distinguished-associate-award-2017).

Why did you join IAH?

I found about IAH when I took on the Knowledge Broker team leader role for UPGro: Unlocking the Potential of Groundwater for the Poor, an interdisciplinary 7-year research programme on groundwater and poverty across Sub-Saharan Africa. One of my early jobs was to raise awareness of the programme, and the researchers active in it, among the global hydrogeological community – so the IAH Congress in Marrakech was the natural place to start. It was a great event, with really great content and a really warm, welcoming atmosphere.

I didn’t join immediately, but as I found out more about IAH and interacted more with members I realised that it provides both useful resources and is an association with good values, which I want to support.

What have been the biggest changes you’ve seen over your career?
Because my Dad worked in computers and communications, I have been lucky enough to have had access to the internet since about 1989 when he bought an Apple Macintosh and a modem. It was unbelievably slow and limited, but I remember in my first year at UEA in 1994, being given an assignment to write about the El Niño Southern Oscillation (ENSO) and being able to download raw sea-surface temperature data from an American sensor array in the Pacific Ocean.

Today we have an information overload. There is just too much to take in. And yet, for many parts of the world, groundwater monitoring and data is still really sparse. Too sparse in many cases. So, we need to invest in smart monitoring and intelligent, clear synthesis so the difficult, complex problems like climate resilience, groundwater pollution and universal access to safe water can be addressed. 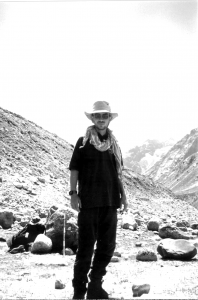 What three tips might you give to someone just starting out on their study or career?

For IAH members who are interested in practical groundwater issues around pumps, drilling and water supply management – particularly in Africa – I strongly recommend joining our RWSN Sustainable Groundwater Development community and visit our website: https://www.rural-water-supply.net/

For those interested in some of the latest African groundwater research, visit https://upgro.org/

Other good resources that I use regularly are: