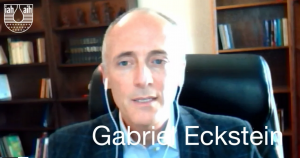 Gabriel holds several positions at Texas A&M University, including Professor of Law at the School of Law and Research Fellow at the Bush School of Government and Public Service. He provides consultancy services to clients worldwide and manages the non-profit International Water Law Project. Gabriel gained extensive experience in several law companies and law schools, including as a Visiting Professor at several universities.

He has acted as law adviser on many environmental and water allocation and pollution matters, for UNESCO-IHP, UN Development and Environment Programmes, UNESCO, AMCOW, OAS, World Bank and others. Much of Gabriel’s work concerns groundwater and the law related to transboundary aquifers is particularly prominent. He served on the UNESCO-organized advisory group on the development of the Draft Articles on Transboundary Aquifers (2003-2008). His 2017 book, “The International Law of Transboundary Groundwater Resources” was a first on this subject.

A member of IAH since 1991, Gabriel served as Co-Director of IAH’s Transboundary Aquifer Commission from 2015-2019. He co-authored papers presented at IAH congresses in Niagara Falls (2012), Zacatecas (2004), and Las Vegas (1998) with his father, the late Dr. Yoram Eckstein, Professor of Hydrogeology and an IAH member for many years.

Gabriel has published widely, including on surveys of groundwater quantity laws and regulations across the US states. Amongst several awards, he received “Best Paper” (2011) in IWRA’s Water International for the paper “Managing Buried Treasure Across Frontiers: The International Law of Transboundary Aquifers”. He has been part of advisory boards and conference scientific committees for groundwater events and is currently President of the International Water Resources Association and on the Executive Council of the International Association for Water Law. We are pleased to acknowledge Gabriel Eckstein’s contribution to the enhancement of policy and governance for groundwater protection worldwide.