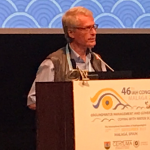 Since 1967, his research and teaching have focused on groundwater quality and contamination. His book ‘Groundwater’ (1979), with co-author Allan Freeze, which included for the first time in a groundwater textbook chapters about groundwater chemistry and contamination, was the most cited groundwater publication in English. Since retiring he has continued to co-lead projects of global significance to publish prolifically.

In 2016, he was awarded the Lee Kuan Yew Water Prize (Singapore) for global contributions to groundwater science and technology. He was the Chair (2012-2014) of the Canadian Expert Panel on Environmental Impacts of Shale Gas Development. He is an advisor to the Government of Singapore as Chair of the Groundwater Expert Panel since 2016 and is Co-chair of the China International Scientific Advisory Committee established in 2018 for the Chinese Research Academy of Environmental Science

He initiated ‘The Groundwater Project’ in 2016, with volunteers from more than 130 experts from academia, government and industry in 14 countries on six continents. The goal is for its groundwater EBooks to be available online free-of-charge and for the website to become the leading global source of groundwater educational materials.

Dr Cherry is an excellent ambassador for groundwater and for IAH. He is a very worthy recipient of the 2019 Presidents’ Award.