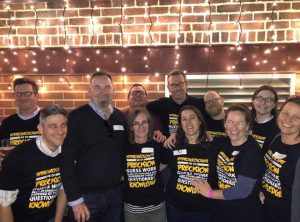 During 2020 colleagues in our Australian national chapter branches organised number of events – both online and in actual *real life*. In September, the Perth branch held a student presentation night online – we’re sure those involved will have welcomed such the experience. In October, for the IAH/NCGRT Distinguished Lecture Series, Wendy Timms presented “Digg’n deeper – the state of mining hydrogeology.

In late 2020 the team from Western Australia organised its annual social event – during which they sold some pretty fabulous tops – as modelled, right, and had earlier also hosted Alan Puhalovich presenting “Assessment of hydrogeological conditions in a high rainfall environment, Elang Project, Indonesia”, and Ian Brandes de Roos presenting “The cost of managed aquifer recharge in Perth”.

Owing to Covid-19 restrictions, Ireland’s annual field exercusion in 2020 was a half-day coastal walk on a September afternoon from Annagassan in County Louth. Following an initial appraisal of the locality’s setting, in respect of climate, topography, soils and subsoils, everyone walked along the beach towards the rocky shore of Salterstown at the southeast. There the bedrock outcrops were examined where the type site of the Salterstown Formation crops out. The bedrock is intensely deformed and is the only significant example of exposed sulphide mineralization in County Louth – thus, it has been classified as a County Geological Site and may even be recommended as a Geological NHA. The group then visited the site of St Colmans Well at Salterstown, where they discussed this unusual well, in both it’s physical form and hydrochemical signature.